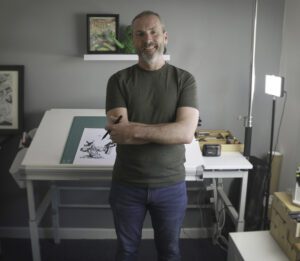 Ant’s journey to comic book artist is a well trodden path. He started reading comic books in the mid 1970s, devouring anything and everything that he could get his hands on in his small welsh home town.

“My gateway drug was the British humour comics that proliferated in those days but in need of a stronger fix, I soon moved onto action adventure weeklies. Which led to mainlining Marvel UK reprints and the inevitable spiral into the imported Marvel and DC monthlies”.

He loved the stories but was obsessed by the art, drawing and copying comic book characters endlessly and his career path was clear. All he did was draw and then draw some more.

Determined and persistent rather than naturally gifted, Ant didn’t let a lack of ability hold back his ambitions and as a teenager, he was getting the bus to London, armed with a portfolio of crude scribblings. In true whirlwind fashion, it only took another six years of repeatedly turning up unannounced at publishers doors, to land his first gig in the late 80’s. An editor at the Marvel UK offices offered him his first gig drawing a strip for Action Force, which is basically GI Joe with a British accent.

Once he was in the door he hauled his way up the greasy pole of comic bookery eventually drawing monthly books for Marvel and DC and over a 15 year career, drew pretty much all the characters he grew up reading, including Spider-man, The X-men, Deadpool, Iron Man, Batman. Superman and many more.

“It was an amazing ride and for the most part an absolute blast”.

Being a comic book artist though is not a life of champagne and caviar and the comics boom of the 80’s was over. It was a constant slog cranking out weekly and monthly stories, navigating the politics and always hustling for the next gig. 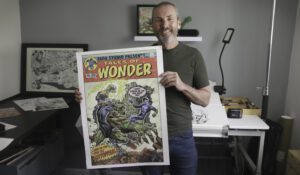 Drawing comics were, are and always will be what Ant is about but he wanted to do more than the monthly deadline grind. And so, on the side, started a small studio designing and creating comic book content for advertising and marketing. His eyes were opened to a world that appreciated the value an artist and writer can bring to a project and would pay accordingly. And so to fund his lavish excesses of a family, assorted animals and a mortgage, he transitioned over to the wider commercial art world.

In a moment of hangover induced inspiration/madness on new year’s day 2000, he christened his new studio The Comicstripper and set about building an empire. Having a knack for drawing in multiple styles, some may have had the impression that multiple artists worked for the mighty Comicstripper Studio, whereas the reality was Ant pencilling furiously.

As the business grew though he moved to a creative director role and took on other artists both in house and freelance.

The studio was primarily a creative service house, developing characters and stories for a multitude of uses.

“We worked a lot in the character licensing world and it was a revelation to see our art popping up everywhere. It got me thinking how something created just once could be used and reused endlessly. There was gold in them thar hills!”

And so Ant began developing in house character based IP for license with the plan to transition away from the client service work and focus primarily on creating his own art and content. But what he didn’t know was before he could get there, there would be an eight year detour.

THEN IT GOT WEIRD 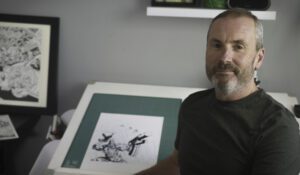 In 2012 a new client called. He was looking to develop some custom comics featuring his own IP.

This client, let’s call him Rony because that’s his name, had a dream to do something amazing. He wanted to create a groundbreaking wearable AR technology to change the way we interact with our world and to populate it with realtime always present creative content.  And the first step was comic books (it seemed to make sense at the time).

The next few years were a non drug fuelled head trip!

Ant ended up moving from Wales to Florida, bringing his team with him. They lived and worked in the future at the most exciting and creative tech company on the planet, Magic Leap.

He was lucky enough to be there at the beginning when the whole company could sit around one table. A time when there are few rules, just possibilities and lots of ice cream. It’s inevitable though that as the company grows, first by tens, then hundreds, then to a couple of thousand, it’s going to change. And his day to day life also changed. No longer hands on creatively he rarely lifted a pencil for a few years. He loved the incredible people he worked with but missed the opportunities for personal creative expression beyond doodling in a notebook in a meeting.

Then Covid 19 happened and it was time to return home to Wales. 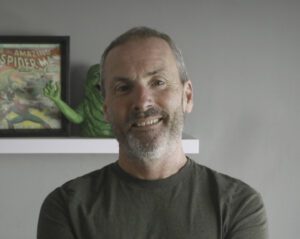 Now back in the UK looking out at a field full of sheep and about as far away from the world of technology as you can be, Ant is excited!

“I’m back at the drawing board and I’ve rediscovered what a thrill it is to challenge myself creatively and spend my days creating characters, worlds and stories. I have big plans and I hope you’ll stick around to see it all unfold”.

Sign up and receive my digital art book plus news and updates!